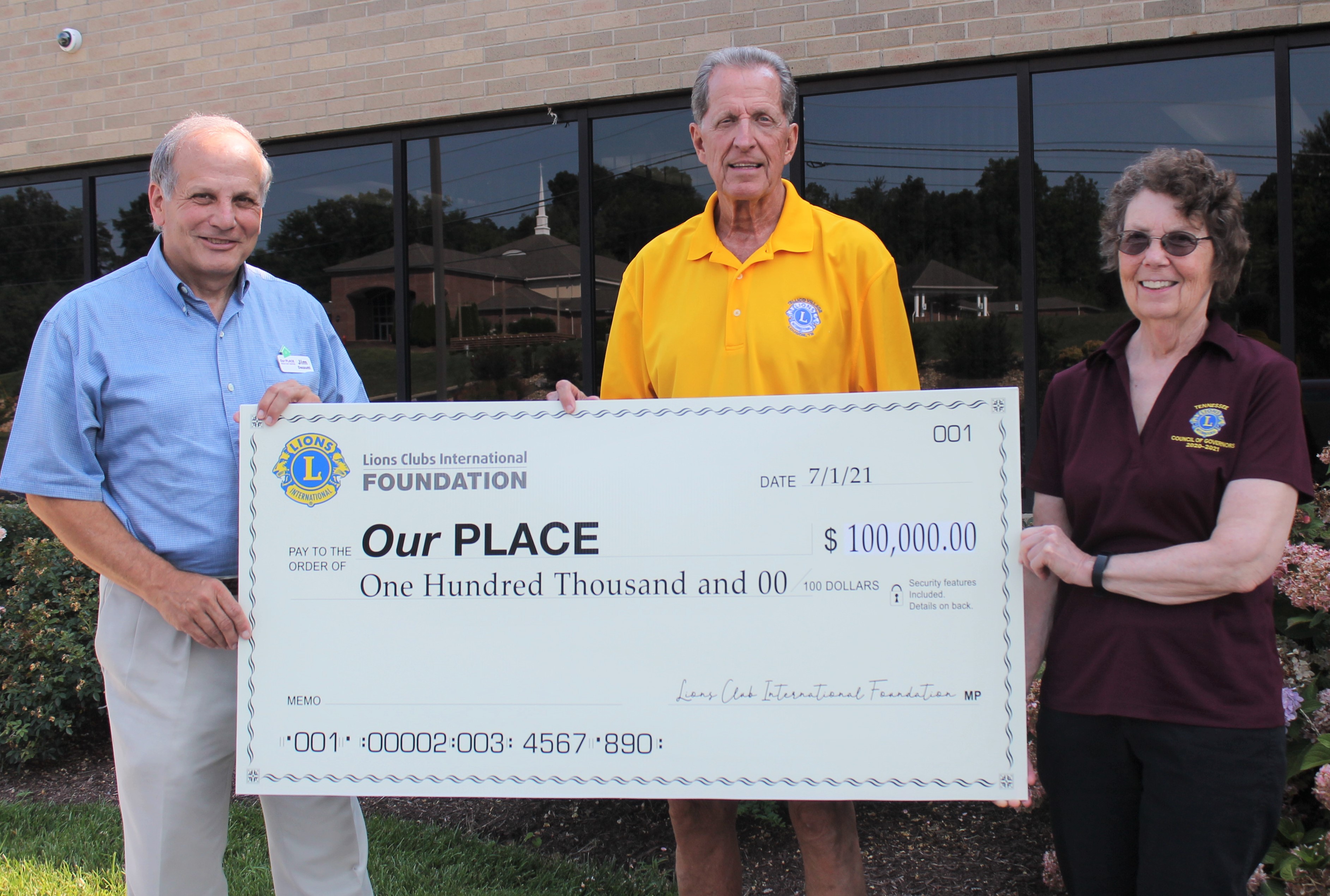 Tellico Village Lions Club President Larry Elder recently announced that they had secured a $100,000 grant for Our PLACE from the Lions Clubs International Foundation.  This  is in addition to the $92,00000 that the club raised last summer and fall through Dollar-for-Dollar Community Match Campaigns in the Village. Lion Elder announced that the grant was secured in cooperation with the Loudon Lions Club Village who recently donated $8,000 to the fundraising efforts.

The Tellico Village Lions Clubs  involvement with fund raising for Our PLACE began in late 2019 when Lion Elder attended several informational meetings on the plans to build Our PLACE.  His attendance at these meetings convinced him that their was definitely a need for a dementia day care center, given the aging of the population of Tellico Village and Loudon and Monroe County. He was also impressed with the detailed business plan that the OurPLACE committee had created to support not only the fundraising efforts but the ongoing operations of the center once it was built. When the Tellico Village Lions Club’s Board of Directors were formulating their 2020-2021 budget, $8,000 was designated as a donation to Our PLACE.  In the summer of 2020, club members were asked to consider supporting the fundraising efforts with a personal donation. To encourage their participation the club agreed to match, dollar for dollar, each members donation. The Dollar for Dollar Match Campaign within the club raised $16,000.  So impressed with the results, the club decided to launch a dollar for dollar match campaign within the Tellico Village Community in the Fall of 2020. The club distributed a flyer to all 4,200 Village homes announcing that the club would match dollar-for dollar all donations made to Our PLACE, up to a maximum of $10,000.  That campaign ended in late November with the club raising an additional $36,000 for Our PLACE.  Although the match campaign was officially over, the club continued to receive several very large anonymous donor donations.  As 2020 ended the Tellico Village Lions Club’s fund raising efforts for Our PLACE was $92,000. In mid December, Lion Elder became aware of a grant program available through the Lions Clubs International Foundation. Similar to what the Lions had done locally, the Lions Clubs International Foundation (LCIF)  had a Matching Community Grant program available to Lions clubs worldwide. The deadline for applying for the grant was February 1, 2021.  Now the challenge was to locate an experienced grant writer to assist with the writing of the application.  Jim Dezzutti, chairman of Our Place, was able to identify a local Village resident, Sharon Busch, who had spent her career writing grant requests. With a deadline for submission of the grant application fast approaching, Ms Busch, along with  Dezzutti, Elder, and past Lions Club President  Ed Roeber began the arduous process of completing the 60 page grant application.  On January 29, 2021 the application was mailed overnight delivery to Lions Club International Foundation in Chicago. Over the next 4 months, LCIF requested clarification and additional documentation on information contained in the original grant application. In late May, the Board of Directors of LCIF meet to review the many applications received from Lions Clubs worldwide. In early June, 13 days before the ceremonial groundbreaking for Our PLACE, Lion Elder received word that the Lions application for the grant had been approved.

The Our PLACE facility, when completed, will provide a program of therapeutic activities for senior residents suffering from Alzheimer’s or Dementia. Its programs will, at the same time, provide respite care to these individual’s caregivers., this is a much needed facility which will add greatly to the quality of life in our village.

The Tellico Village Lions are proud of their accomplishment in this effort. It would not have been possible without the support of residents of Tellico Village and the Lions Clubs International Foundation . A BIG THANK YOU to both for their support.